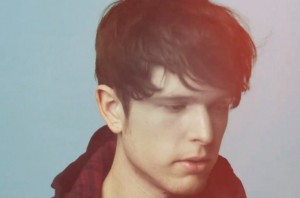 The cover art of James Blake’s wonderful new album ‘The Colour in Anything’ is a visual representation of the musician. It was painted by the other Blake, 83 year old Sir Quentin, and shows Blake donned in an overcoat in a wintry English park, the sparse trees inhabited by menacing black crows.

The artwork reflects the musical world in which James exists – a moody, colourless, smudged sonic palette. This is not to say that his music is dreary. Rather, he has humanised electronic dance music, by adding in elements of R&B, soul and folk. And then there is his warm choir boy voice which he uses as another instrument by cutting it to pieces and layering it so we often hear a multitude of Blake’s on one song. The last track on the album, the reflective ‘Meet You in the Maze’ showcases this.

I’ve loved Blake’s voice ever since I first heard him on his self-titled debut album in 2011. He followed this with ‘Overgrown’ in 2013 for which he won the Mercury Prize. Never a truer line was sung than ‘suddenly I’m hip’ on the atmospheric ‘Retrograde.’

Just as Blake lent his voice to Beyonce’s ‘Lemonade’, so have Bon Iver and Frank Ocean collaborated with Blake on ‘The Colour of Anything.’ You’ll hear Bon Iver’s unmistakeable voice on ‘I Need a Forest Fire.’ Try to ignore the whoop at the start of the song – it’s really got under my skin!

Album highlights: All of it but if I had to pick – ‘Radio Silence’, ‘Put That Away and Talk To Me’, ‘Modern Soul’, ‘Meet You in the Maze.’