2014 was an interesting year for music. Established names pulled out career defining albums, while new artists stomped over the rickety remnants of genre boundaries to produce brilliant debut hybrids. There was more than something for every type of listener. For me, ‘Lost in the Dream’ by The War on Drugs stood above the others. Every time I listen to it I think of The Boss’ third album ‘Born to Run,’ albeit with an aesthetic of smoke and mirrors and hazy psychedelica. ‘Lost in the Dream’ was also Adam Granduciel’s third album, a labour of love in which he worked through panic attacks and anxiety to produce what I reckon is an enduring masterpiece.

I haven’t ordered these albums in any meaningful way except alphabetically and, at the bottom of the page, you’ll find a spotify playlist with  a couple of songs from each one. 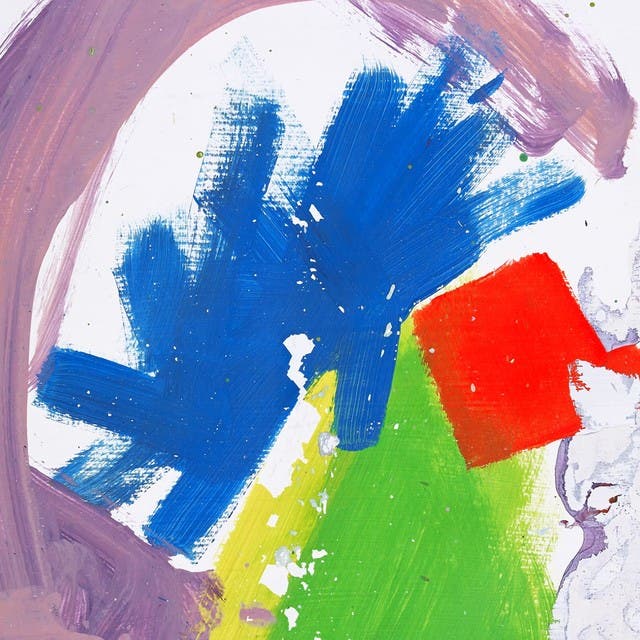 Skilled in the art of uncomfortable lyrics (‘ turn you inside out to lick you like a crisp packet’), alt-j have produced yet another unique and unpredictable collection of songs. Kudos for using a sample of a Miley Cyrus song on ‘Hunger for the Pines’. Best thing she’s done all year. Infectious (!)

There’s just something about vocalist Molly Rankin’s voice that makes me smile. It’s nicely penetrative (if you’ll excuse me for combining those two words). Jangly, melodic pop for you to skip along to (high knees please).

Ah Beck, why do I love you more when you suffuse your golden glow upon us. ‘Morning Phase’ is the companion piece to his gorgeous ‘Sea Change.’ And ‘Sea Change’ in all its despair needed a friend. ‘Cycle’ which I’ve included below sets the scene for this languorous dappled album. I’m like a cat lying in the sun when listening to it.

I don’t care that some highfalutin critics thought this was a bit meh. I fell for it when I was on holiday and its ascending, poppy sound could lift the spirits of the saddest soul. Guest vocalist Rae Morris on ‘Luna’ is extraordinary. The album as a whole has an exotic eclecticism created by frontman Jack Steadman penning the songs while visiting some far-flung places. It has that sense of arrival and expectation you get when the wheels hit the tarmac. Joyous. Damien Jurado, the quiet worker, gently drops his 11th studio album and, as usual, it finds its way under our skin. I’ve always been a fan of his clever, genre-jumping songwriting. ‘Brothers and Sisters’ is the third album in a kooky trilogy behind 2010’s St. Bartlett and 2012’s Maraqopa. Although Jurado has a sound that is his, I can still hear Nick Drake hiding in some of his songs.

Elbow, from Manchester, formed over twenty years ago and this is their sixth studio album. It was released a few days after lead singer Guy Garvey, newly single and newly ensconced in New York, turned 40. What we get is a poetic, simmering rumination on ageing and the importance of friendship. As with every Elbow album the lyrics take prominence. The line “The way the day begins decides the shade of everything/ But the way it ends depends on if you’re home.’ is gorgeously delivered by Garvey in ‘New York Morning’. On paper lyrics such as these could be saccharine but in Garvey’s voice, a gruff Northern Mancunian accent, it works in all the right places. The prize for the best line however has to go to ‘Charge’:

“Glory be/ These fockers are ignoring me/ I’m from another century.”

Possessed of both ethereal beauty and brutal lyricism ‘LP1’ is a mesmerising, if somewhat challenging, listen. 27 year old Taliah Debrett Barnett, aka FKA Twigs, is 100% in charge here. Twigs (named because of her cracking limbs when dancing) is fascinating live – she was an accomplished  back-up dancer in many high-profile music videos  – and now the stage is all hers. Raw, strange, carnal.

‘I wish you’ sings Nicole Miglis in ‘Murmurs’, looping over and over and over until we have no choice but to let go and float headfirst into the album. Miglis, a pianist and flautist, uses her voice as just another dreamy sound in an album full of otherwordly, diaphanous sounds. Neko Case, when interviewed about the writing of ‘Brill Bruisers’, said that the songs had to have certain qualities:”Do you want to hear it over and over again? Do you feel like singing along to it? Does it have that strange, kind of uplifting feeling?” And my answer? Not to overstate things, when I listen to these songs I have a profound, near-religious, incandescent experience. Seriously.

Love Velvet Underground? Pavement? This is custom-made for you.

Blissful, charming, a summery treat of an album. This is usually playing when I’m doing jobs I hate. ‘We’ll come back one day, we never really went away,’ we hear on opening track ‘Futurology’. Well, the day has come. The Manic’s are back. ‘Futurology’ is their long-promised European, krautrock album. I wonder if Richey is somewhere listening to it.

‘The River and the Thread’ is about place and was inspired by a road trip Cash took South to Arkansas and Tennessee. The songs are steeped in memory and nostalgia. It is a beautifully polished work and reflects where Cash is in her career – standing on her own away from the shadow of her famous father.

S.Carey is perhaps better known as the drummer for Bon Iver. Carey has a degree in classical percussion and his talents in this area are on show in this introspective, meditative album. Best listened to on headphones, this is a collection of soundscapes with landscapes. The album cover perfectly describes the feel of these songs.

Sharon van Etten doesn’t really sound like anyone else. Her voice has a mournful, haunting quality that lends itself well to the reflective themes of her songs. This is an album about heartbreak and the lyrics are delivered in van Etten’s plain vanilla style. There are no gimmicks here,  no melodrama. Just songs, a rich honest voice and gorgeous harmonies.

What the?’ I balked, when J Mascis’ electric guitar on ‘HEAL’ opener ‘Goshen ’97’ rebooted the tinnitus in my left ear. This was not the Timothy Showater (aka Strand of Oaks) I knew. Instead of intimate hushed folk I was being blasted by arena rock. And here he was, on the album cover looking as staunch as Aslan.  I was momentarily confused until the need to hear again the first 30 seconds of ‘Goshen’ kicked in. I probably played this album more than any other last year. Why? Even with its pall of shame and self-loathing, it’s downright cathartic.

I was excited about a new album by Mark Kozelek with his SKM hat on.Previous albums ‘Ghosts of the Great Highway’ and ‘Admiral Fell Promises’ are in my top twenty of all time. But I have to say ‘Benji’ wasn’t an immediate infatuation. It’s confessional to the extreme, sometimes uncomfortably so, and I missed the ascension that usually happens in Kozelek’s songs, sort of a delayed gratification that makes them so alluring. ‘Benji’ is less about melody and more about autobiographical story-telling. It demands the listener’s attention. You can’t really have Kozelek mumbling away as background noise. I can say, after many listens, once you’re in, you’re in. Just don’t give up too easily.

NZ’s own Hollie Fullbrook has a lovely voice. I hear shades of Joni in it, and Nick Drake is there too in the delicate guitar picking. But the real attraction here is Fullbrook’s writing. Although the arrangements are sparse, there is much emotional weight conveyed by the lyrics. In ‘Me at the Museum, You in the Wintergarden,’ Fullbrook focusses on the awkward meeting between new lovers:

We’ll lie on the lawn
Smile so stealthily
Buttery and brief
We’ll lie through our teeth.

A buttery and brief smile says much in little. There is a moment in opening track ‘Under the Pressure’ when Granduciel lets rip a giant whoop (5:20 to be exact). It is indeed a moment of pure jubilation and, lordy, are we there with him.

‘Atomos’ was originally created as a score for dance and, as you listen, you can imagine that that is so. However, if you headphone listen when out in the everyday, you may find the known becoming unknown. This is a powerful piece that is best heard as a whole.  The band name I admire the most.

Jenn Wagner and Andy Stack of Wye Oak have reinvented themselves on ‘Shriek’ – this album is full of breezy synths, a far cry from folksy ‘Civilian’, their 2011 critically lauded LP. Although the instruments are different, the hooks and allure are the same. To my ears it’s still a glorious Wye Oak offering.

Playlist – scroll down on the right hand side to see all 42 songs.